Professor Johan Schot has been awarded an honorary degree by the New University of Lisbon (Universidade NOVA de Lisboa) for his work in the discipline, History of Technology. He is the first in the country to receive an ‘honoris causa’ within the field. This prominent accolade recognises Professor Schot’s influential, wide-ranging and significant research in the discipline. It also signifies the maturity reached by the field within national and international research. 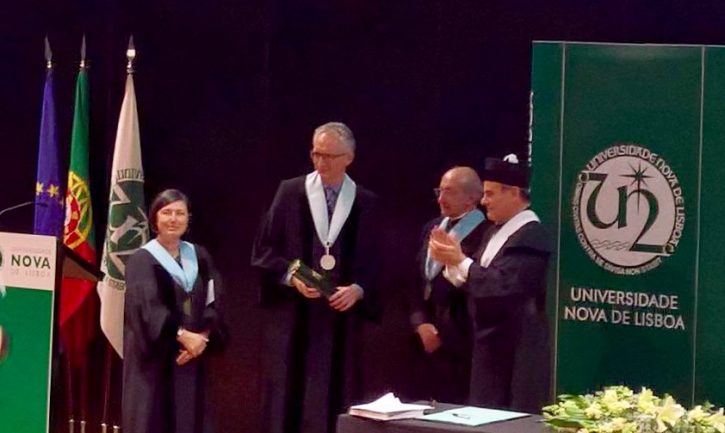 The impact of Professor Schot’s work – at the interface of science and technology, and the humanities, using historical perspectives – is substantial. Professor Schot has been key in the development of the History of Technology, in recognition, receiving the 2015 Leonardo da Vinci Medal and, in the previous year, winning the distinguished Freeman Prize.

This new honour marks out further, Professor Schot’s skill for extensive collaborative work in creating and fostering transnational research communities, in this instance, the network ‘Tensions of Europe’ which expands and deepens the History of STI. This research network subseqently inspired his editorship of the six volume series – ‘Making Europe: Technology and Transformations, 1850-2000’ – which examines the continent through a fresh lens with new perspectives and narratives.

Published by Palgrave, ‘Making Europe’ focuses on key dimensions of technological change. The accessible and well-illustrated volumes cover a broad scope of issues, giving sharp analysis and critical knowledge with fresh thinking. Professor Schot, along with his co-editors, orchestrated 14 distinguished historians from across the continent to bring the series to life. His own book, the third in the sequence – ‘Writing the Rules for Europe: Experts, Cartels & International Organisations’ – authored with Wolfram Kaiser, highlights the hidden integration within Europe. This topical volume demonstrates how by examining other routines, rules and practices an alternative view of Europe forms – counter to that of the EU and Northern nations’ narrative.  This offers an important viewpoint for the current debate on Europe – its validity, meaning and future. Schot outlined the importance in his acceptance speech at the ceremony.

Professor Maria Paula Diogo, Head of the Interuniversity Centre for the History of Science and Technology (CIUHCT) at the University who originated the nomination for Professor Schot said:

“The Honoris Causa Degree by the Universidade NOVA de Lisboa has been awarded to Professor Schot as public recognition of excellence in research and teaching and shows his extensive relationship and interaction with the university.  Johan’s CV clearly shows a dynamic career, punctuated by a set of books and articles that are must-have references in the field of History of Technology. However, what is really unique about Professor Schot is his ability to bring people together to work around a research project or a specific scientific output, his generosity in welcoming new scholars, the absence of any prejudices, his vibrant enthusiasm for research and debate, and his perseverance in the face of adversity. The Centre for the History of Science and Technology benefited from being part of ‘Tensions of Europe’ network, one of Johan’s main scientific offspring. This honorary degree is thus an accolade to fruitful transnational collaboration and solidarity. Values that we should treasure as the most important legacy to the younger generation of historians of technology.“

“I am deeply honoured. I would like to thank the university, and all the people who contributed to me getting this award. I have been working with Portuguese historians of science and technology, led by Maria Paula Diogo, for two decades now. It has been a transformational experience. They were crucially important in arguing and showing that European History is not just generated in Western Europe but that crucial contributions have been made by other regions and people in Europe. On top of that they have put the History of Europe into a global perspective, offering a much needed provocation to the story that Europeans are innovating and diffusing their practices to the rest of the world. Instead they have produced histories which show a much more symmetrical account of encounters between the peoples of Europe and other parts of the world.  They have made vital contributions to the building of a European network of historians, Tensions of Europe; the development of a Digital Museum for Science and Technology – Inventing Europe; and the writing of a six volume book series – Making Europe, Technology and Transformations, 1850-2000. It has been an exciting and inspirational journey which I am very happy to continue and celebrate.”

The most recent book in the series – ‘Europeans Globalizing, Mapping, Exploiting, Exchanging’ (Diogo and Van Laak) is profiled too at a corresponding event on 22 March at the New University of Lisbon.  The final in the series – ‘Communicating Europe: Technologies, Information, Events’ (Griset and Fickers) –  along with all the paperback editions will be released in Autumn 2017.

As Director of the Science Policy Research Unit at the University of Sussex, Professor Schot hosted a SPRU alumni lunch to celebrate the award.

Further in his international collaborative work, Professor Schot is seeking to forge new links with policymakers from the Ministry of Science, Technology and Higher Education and the foundation for science and technology, the FCT – Fundação para a Ciência e Tecnologia – around potential membership of the Transformative Innovation Policy Consortium (which Professor Schot initiated and cofounded). This reinforces the, already strong, integration and research relationship between SPRU and the science, technology and innovation sector in both Portugal and the wider international research community.