A Post-plastic Age by Stealth?

In the 1950s plastics were the future. They still are. The 9 million tons produced since the first plastics revolution has a very long, very durable one. With 13 billion tons calculated to be in landfill by 2050 and our seas a ‘plastic soup’, what we do with all this most ‘convenient’ of materials is of paramount concern.  We are currently disposing the equivalent of a rubbish truck of plastics into our oceans each and every minute. Micro-plastic has entered the food chain with foods such as mussels showing tiny ingested fragments. Think of that next time you’re in Paris ordering moules et frites. 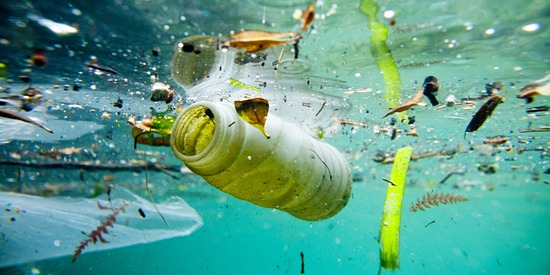 So, when I walked into my recent talk to challenge the plastics sector on these issues, I wondered how receptive and open to the challenge of change they would be.  So, did my ideas go up in smoke, or did my theory find a new audience who could mould it into another application? This was, after all, the first time I had taken my hypotheses of the Second Deep Transition to a large business audience in strategy setting mode. I could influence and impact thinking to help set the direction.  The plastics industry is a particularly relevant one to start with as they are reliant and complicit in a number of systems – fossil fuel, food, construction and mobility in particular.  I was moving the Deep Transitions theory from its academic arena to a wider audience where the assertion would threaten their business-as-usual. How would they deal with that?

With this in mind, I began my talk, at the Dutch Polymer Research Platform‘s twentieth anniversary annual meeting, with mild trepidation and much curiosity. The DPI were launching the final instalment of the publication – The Plastics Revolution  – with a day of interventions and reflections, followed by one of future scenario and strategy setting.   I was on day one’s programme twinned with Harry Lintsen, a Dutch scientist who researches microplastics and is a Professor in History of Technology from the Eindhoven University of Technology.

He ascertained that there is not enough urgency within the industry to create a second plastic revolution akin to the first. If a second age of plastics is to happen, leadership to create it is needed. He urged that the DPI become this conduit and give direction. The second revolution, he asserts, is about looking at the plastics industry’s chains to move from a ‘linear’ plastics society to a ‘circular’ plastics society where waste is zero. All the plastics produced need to be reused and redistributed. Professor Linsten advised that to achieve this, we need a focus on R & D to innovate new separation methods for plastics and to discover new kinds that are easy to upcycle. 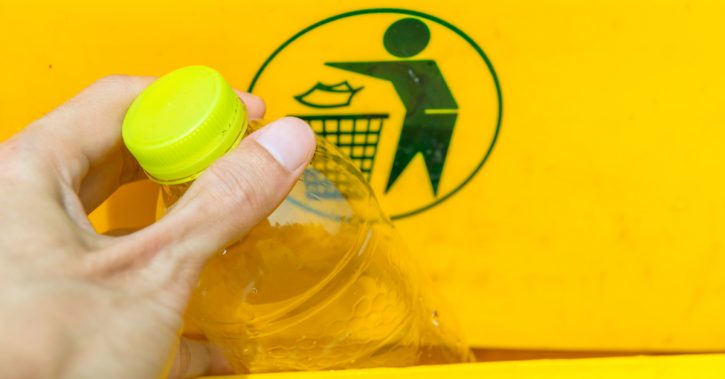 After Professor Lintsen outlined his rationale, I used my thinking on the deep adjustments occurring in the world to provoke the delegation, to stir urgency and prompt serious reflection around how these forces of change in society would shape their future. They needed momentum and a clear, set direction or it would happen by stealth, I assured them. They must pay particular attention to being the makers of their own bright, shiny, circular future.  My message to the audience was clear. If transformation isn’t driven by the sector, the industry will find a post-plastics age quietly coming to be. A revolution indeed by stealth.

I opened my presentation with the video clip, below, from the 1960’s film, The Graduate. Here, Dustin Hoffmen’s character, Ben, receives whispered, urgent advice on the future. ‘One word – plastics’, his adviser assures. I asked the questions: ‘Who’s doing the whispering now? And what is being confided?’

Plastics has enjoyed this first revolution from the 1950’s to present day. But what’s its prognosis now? How stable is, in the discourse of Sustainability Transition Studies, the plastics socio-technical regime? 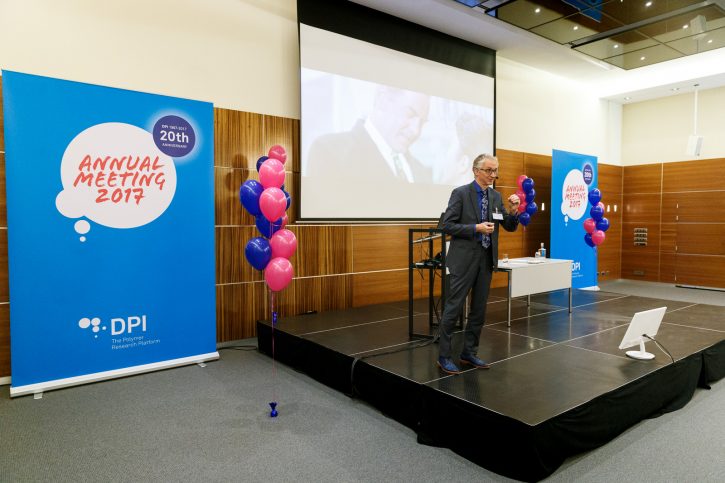 Delivering my talk to DPI

Well, it can be argued that it’s still a growing market. The ICT revolution does not diminish but increase requirements. Many other industries are seemingly dependent on this most convenient, robust and cheap product. Polymer and its derivatives don’t have a clear, winning alternative. This includes bio-plastic which is expensive to produce and has its own sustainability production issues. With all these factors considered – will plastic be resilient?

My cautionary advice urges that tipping points and paradigm shifts occur regularly through history. We’ve seen the passing of the hegomony steam, of heavy engineering and now more likely than not, oil. 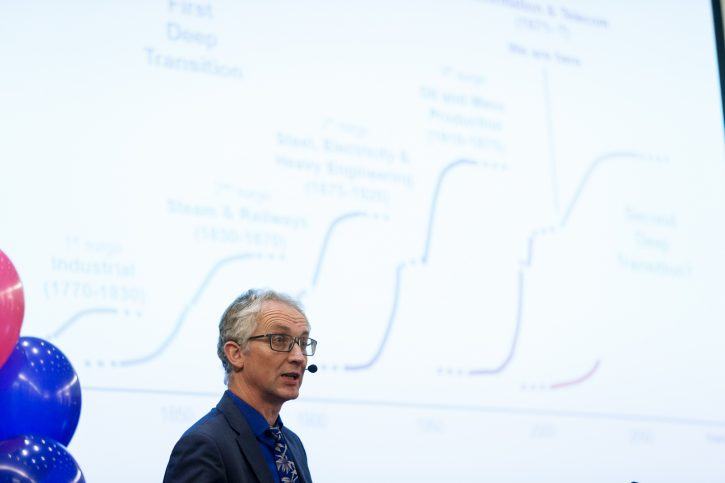 Introducing the surges associated with the Second Deep Transition

The central question is  – can plastics ride on the next surge of demand to experience a second revolution? If other game-changers and thought-leaders are not prophesizing plastics, the answer will be: ‘No’. So what alternative materials and approaches might they now being touting? Does the plastics industry truly know? And, more vitally, do they care?

As we transition to a future where sustainability is central; and the circular and sharing economy make the ‘Take – Make – Dispose’ variety look preposterous, out of mode and rather 20th century, who will be the new rising stars? Failing to pay attention to alternative niches being developed (and strengthened and expanded), certainly serves as a threat to the current incumbent plastic ‘regime’.

If niches grow, attitudes change, values alter, and behaviours shift, the plastics industry’s traditional audiences will transform.  When other sectors, like cars, housing and food, are quietly starting to adjust because of consumer, market and government pressure, and with fossil fuel becoming more expensive and renewables much cheaper, where will that leave polymer? With campaigns for plastic-free aisles in supermarkets and public awareness rising on the damage, in particular, single-use plastic does, some claim we have already reached the tipping point… 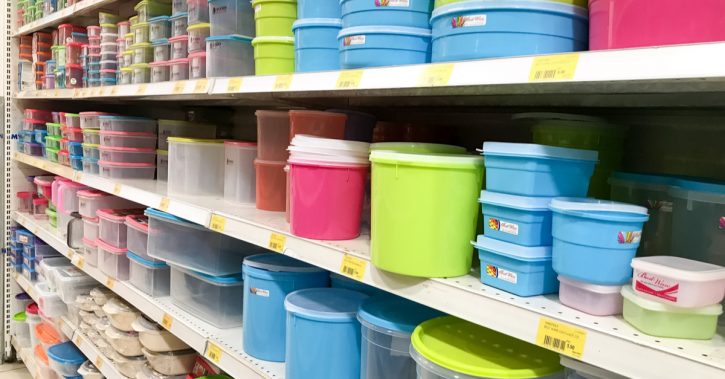 What did my delegation think? I asked the room to take the long view, to use the lens of history and deep transitions to cast a view forward to another 50 years. What does the world look like and what’s the shape of plastic in it? The delegation’s next day objective was to take the time to answer this question, to then set strategy and to forge a direction to get there. Had my theory resonated?

There’s nothing like an unscientific straw poll to gauge an audience’s reaction. How many members of the audience thought that what I had just shared was a work of fiction, and how many non-fiction?! Remarkably, two-thirds raised their hands to the latter. They indicated that they felt challenged, and one, I hope, that they knew they must embrace.  Jacques Joosten, Director of DPI shared with me: “Your talk inspired DPI to explore actions for a new future for plastics in a circular economy.”

I describe myself a ‘moderate pessimist’, so this I shall take as a good day’s work. With follow-up and persistent effort worldwide, the shift can gather momentum. More importantly, if this kind of openness to new thinking to transform approaches and behaviour starts to disperse throughout the global plastics socio-technical regime, it’s a good news day too for our marine-life friends, the environment and our own human health.

This blog was produced with Geraldine Bloomfield.